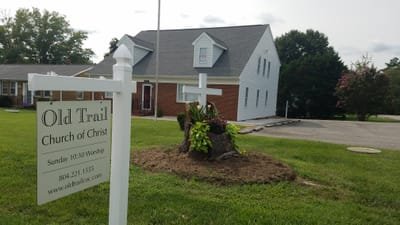 Here are two versions of the history of Old Trail church of Christ for you. The first one is for the reader who would prefer a quick overview. The version below it is written for the more curious and detail oriented person who has time to slog through more of the particulars.

Old Trail church of Christ was founded with the intention of taking the Gospel to the rural Virginia counties of Goochland and Powhatan.
The first meeting of the church was on Easter Sunday, April 21, 2019. Steve Raab served as the minister. The church leased the St. James chapel, a nineteenth century wood frame building in Powhatan County, just south of the James River. The building was used as their meeting place until July 10, 2020 when the church began meeting in their current location in Goochland. This building was formerly a residence and office building. At about the same time as the move in physical location, the church lost their highly regarded and valued minister and began the search for a replacement. In the interim, several men from surrounding churches filled the pulpit on a rotating basis. Through changes in location, changes in membership, and a change of preacher, the mission of the little congregation has remained steadfast: to spread the Gospel while serving the residents of Goochland and Powhatan counties.
The prayers of Old Trail were answered when Jamie Davis, an experienced minister of the Gospel, expressed his desire to preach full time for them. He began his ministry there on April 4, 2021 and continues to work with, guide, and minister to the congregation of Old Trail.
The church invites you to worship with them any time that you can make an opportunity. The meeting information is on the main page of this site.

The Old Trail church of Christ currently meets at 3015 River Road West in the village of Goochland Courthouse, VA 23063, located directly across from the Wells Fargo bank. The church moved to this site in early July of 2020 from the historic St. James chapel in Powhatan County, after using that facility for the first fifteen months after the founding of the congregation.

The church held its first worship service Easter morning April 21, 2019. Steve Raab preached the first sermon, titled "Something Old, Something New" which encouraged the listeners to hold fast to old things which are good, while letting go of the old which are not good, and to gather new good things while rejecting impure newness.

Worshipers gathered from Powhatan, Goochland, and Henrico counties to share their love of God and to worship together. Fifty-two souls sang, prayed, and glorified God on a beautiful spring morning which inspired awe, appreciation, and acknowledgement of his wonderful creation. Nineteen of those present were persons from the surrounding community without affiliation to one of the area churches of Christ. They were either invited by friends and family or they learned of the new congregation through one of the various outreach efforts by Old Trail weeks before Easter Sunday.

Worship leaders for the inaugural service included Ernie Walton, who lead the first prayer, Sammy Marshall, who read John 3:1-15 as a basis for Steve Raab's sermon, BJ Marshall, who guided minds in thoughts before the communion, Steve Novak, who led a closing prayer and Larry Lewis, who led the singing worship. The very first song ever sung in an Old Trail worship service was "To God Be the Glory", specifically chosen to acknowledge and proclaim that the Old Trail members recognize and praise God as the founder and sustainer of this little mission.

With God's guidance, the first plans for this congregation of the churches of Christ were penned and prayed over on a napkin July 19, 2018 by David Marshall and Steve Raab during a men's fellowship breakfast in the back room of the Golden Corral restaurant in Glen Allen, VA. Steve and his wife Selma had been driving to Oceana, VA from their home in Powhatan County every other Sunday for five and a half years with Steve serving as the itinerant minister for the Oceana church of Christ. For years they longed to have a new congregation of the church in their home county to be able to serve, minister, and fellowship with Christians who were also their neighbors. David and Judy Marshall live in western Goochland County and drove to the Tuckahoe area of Henrico County to worship and serve, and also yearned for a church that could better serve the residents of their home county. Steve learned that his ministry in Oceana would come to a close in early 2019 and saw this as an opportunity to shift the focus of his spiritual gifts to minister closer to home. Knowing the hearts and desires of the Marshalls, Steve proposed the planting of a church whose location could serve areas of both Powhatan and Goochland counties. Ernie and Robin soon joined the mission to plant a church in these areas of rural Virginia and the initial core of the congregation was formed.

The move to the current location has been made with the belief that having access to a building 24/7 rather than being limited to a few hours each week, as we were at the previous location, will provide the church with more opportunities to serve the community as well as our members. We now have areas that can be used as classrooms and an office for our minister. These are improvements from the former situation. The church will now also be able to have a permanent sign on the property. Before, we were required to remove all signage except when we were having our worship service. These, along with several more advantages were considered when the idea for moving our location was first presented to our members.

Within weeks of moving to the newer meeting site, the relationship between the church and the Raab family shifted in a direction that left the congregation without their beloved minister. Steve and Selma resumed serving their former congregation while Old Trail began the search for a new minister.
From August 2020 until April 2021, Old Trail used eleven different men from six different congregations to fill the pulpit on Sunday mornings. Beginning with the second Sunday in December 2020 through March of 2021, the preaching responsibility was rotated between Melvin Jones and Jamie Davis, both of whom were leaders at Cawson St. church of Christ in Hopewell, VA. Both men were capable speakers with years of preaching experience for each of them. Their willingness to share the pulpit at Old Trail was a great blessing while the search for a more permanent solution continued.
Included in the speakers during the months after the departure of the full-time minister at Old Trail were: Jones and Davis; Charlie Barron from Glen Allen church in Glen Allen, VA; Elijah Stewart, Ben Steele, Mike Palmer, and Mark Foreman from Three Chopt church in Henrico, VA; Matt Merrotto from Southwest church in Chesterfield,VA; Mitch Propst from Shelby church of Christ in Shelby, NC; and David Marshall, a member of Old Trail.
In March of 2021, Jamie Davis expressed his desire and willingness to become the full-time minister for Old Trail. He began that work in April as an answer to the months of prayer and searching. The church looks forward to a long and fruitful relationship with Jamie, to God's glory.

The Old Trail church of Christ appreciates the prayers and support of Christians across the country and even around the world. Members of other local congregations are encouraging the work in Goochland and Powhatan counties with financial aid, supplies, labor, attendance, and participation in worship services. Their dedication and service to the spread of the Gospel message in this area gives the church at Old Trail reason to praise God, give Him thanks, and continue to teach and worship in this place.
God is good ALL the time!